We are getting very close to it… still only three days of wait before the Eurobike, 2009 edition! We will cover the event as the last year, with a complete article every days, about the main brands, or about the brands pushing the enveloppe. We will do our best to translate all of them in french/english, if possible.

This year, it starts the 1st of September with the demo-days. This day of tests allow the journalists to try a lot of bikes put at their disposal by most manufacturers. The first day of the trade is the 2nd of September.

Before the start of the trade, we will let you discover the factories of two german manufacturers, major in wheel industry. These two presentations will be online on monday morning, and wednesday morning, if all happens well.

In the mean time, let’s see where we are supposed to see new products, according to the current news or rumors.

At Corima, the prototype of the new carbon wheel should be unveiled, at least that’s what we hope. The tubeless wheels and the 2D versions, widened and lightened will also be visible. 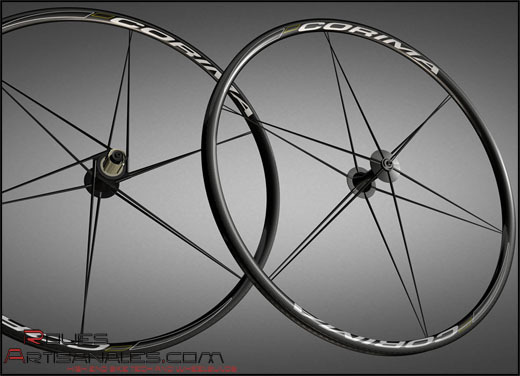 Our switzerland’s friends have designed a new rear hub: the Tricon. Its flanges are composed of three different groups of spokes. The spoking thus is specific, with, a priori, a radial
spoke and the two others spokes crossed.
The alloy and MTB wheels should be equipped of this hub.

The high-end spokes are supposed to be coming in different colors. The Aerolite and Competition spokes should be available in red, blue, green, yellow beside the current tints: silver,
black and white.

Finally, the 240s hubs are receiving a newest decal.

The R-SYS Ultimate seems to be the only technical new for 2009/2010. We presented the prototypes the 8th of May. According to the latest information we have, the set won’t be available before the end of 2010. A so exclusive wheel should need a lot of tests.
Beside this newest R-SYS, the Mavic Lab has been featured some days ago. As quick reminding, this program allows the customer to build an R-SYS, or an SLR wheelset with different special options, whose the nipples color, to the bearings for example. The cost of some options is crazy but it’s good to see that an important manufacturer allows its customers to imagine his own wheels. Saris is releasing a newer comptuter. The current version already is very informative, but the newest is bringing even more detailled functions……

MacLean Quality Composites hired Paul Lew at the end of the last year. The information was confirmed, the Pro VT1 is on the works and will be available for sale in the incoming months. We hope the most performant and easy to ride wheelset we have been able to test will see its reliability increased and will be released for 2010… or 2011 at the latest. 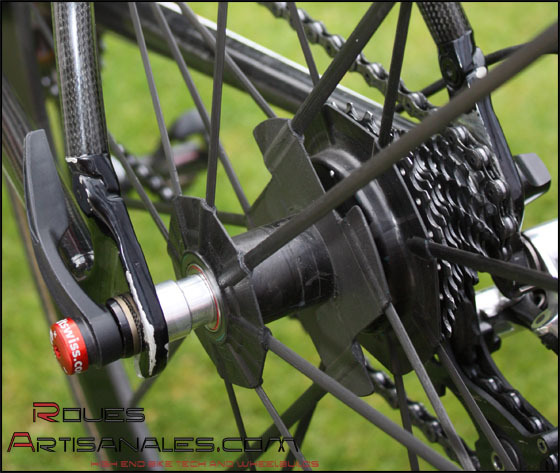 The DVUL46 rim should be lightned. Indeed it was supposed to lose weight as 2009 version, but the slimming was delayed. From 285g, they should lighten to 250g for 46mm.

Japanese manufacturer is equipping its pro teams with new wheels. The C35 and C75 fill the gap existing in the current range. The newest 35mm deep has been designed to deal with the cobbles met in Paris-Roubaix for example, but also the versatility required for any kind of race.
The 75mm deep is in direct competition with the Zip 808 or Bontrager Aeolus for example.
The weight of these newest wheels is +/- 1240g and +/-1500g.
Regarding the current wheels, the C50 remains unchanged (50mm, 1485g) except a minor change at the nipple seat: the UD fibre is changed to 3K fiber for increased strength. The C24 has its rim lightened through newer fibers, and newer layup. It will only be 1100g for 24mm deep.

The carbon crankset is available in limited quantities. 22g are shaved off the alloy one. It is compatible with Dura-Ace 7900 as well as the 7800.

iClick pedal is an important new from Tune. The NXR frames are coming along too. We will be present to show these new products. Indianapolis manufacturer unveiled its newest products at the Sea Otter, early in May. The shape of the 285 rim (303 wheels) is deeply modified. It is extremely wide and almost looks like a MTB rim. Its aero and resistance properties are claimed to be rised quite a lot.

The 101 wheels, aluminium model, receive a newer 30mm toroidal deep rim. The spoking is lightened: 18 spokes front and 20 spokes rear, from Sapim Cx-ray, for only 1484g. In term of aerodynamics, this new wheel is supposed to come with a significant improvement. It is claimed to be even faster than some deep wheels.

The Super 9 Disc is seeing the light: it is a mix of the Sub 9 and the 900 Disc. It yields both the aero properties of the first model, and the lightness of the second one!