We bring you a special preview showing of the latest Lightweight Obermayer Generation 3 !
Unveiled at Eurobike in Germany earlier this month, we got a chance to see these new wheels before the trade opening!We’ll give you a detailed tour of the latest evolution of the legendary wheels that have helped dozens of pro riders to win.
Between the two first generations, the foam, which forms the skeleton of the rim, is different. The lighter foam in the Generation 2s is similar to the foam used for the wings of the Airbus A380.
See our article on the Generation 2s here .

Now, let’s look at the differences and improvements in the Generation 3s.

Immediately visible, the spokes are now pure carbon. This definitely gives higher stiffness with tensile strength of 1,400kg versus 1,200kg for the hybrid spokes. When pulling two spokes together, one from each side of the wheel, they certainly don’t flex as much as the previous Kevlar/Carbon mix spokes.

We’re not sure about this, but Lightweight also claims impact resistance is up 25%.
These full carbon spokes remind us of those of the a certain French manufacturer. It seems life is getting tough in the high end wheels market.
Carbon-Sports claims a 30% increase in stiffness over the Generation 2 and 40% over the Generation 1 wheels. We will check this in testing… 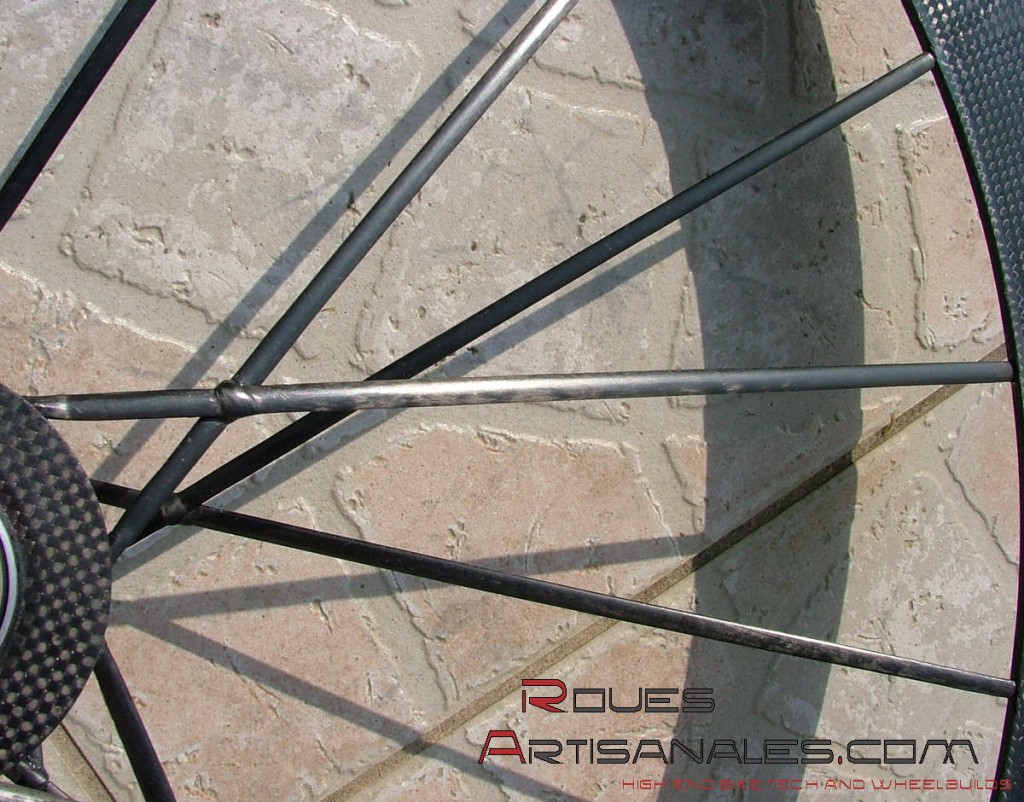 Second important point: the finish!
While the previous versions were matte, these rims reflect the surroundings like a mirror! The finish is close to perfection. We were a little disappointed by the spokes on the Generation 2. Kevlar is very hard to work and tends to fuzz. Here, the spoke finish is much improved – we couldn’t spot any imperfections.
The internal part of the hub flanges are also a new carbon – woven and slightly exotic.
Lastly on the finish, the glue around the spoke/hub interface is now black where it previously had a more visible reddish tint. Third update on the wheels: the freewheel now only has four splines versus eight for the older versions. Tune, who manufacture the complete rear wheel hub mechanism, drew inspiration from competitors rotors and let Carbon-Sports benefit from this.
The bearings are the same as the Generation 2s: the front one is excellent, it takes hours to stop spinning! Without a doubt the best!
However, the rear one is still just as rough: hard to turn, its friction torque seems to be amongst the worse. This problem is caused by misalignment of the bearings which don’t fit the axle perfectly and the bearing bed in the carbon body. If the body was made out of alloy, the bearings would certainly be smoother. Even after a thousand kilometers breaking in, they remain as « tight ».
Actually, the problem is caused by the right end cap which is too pressed onto the axle and « crushes » the rotor bearing. To solve the problem, we disassembled the hub and used thinner washers between the rubber O seal of the end cap and the rotor bearing.
Anyway, some negotiations with DT Swiss are underway for their ratchet system and the ceramic bearings of the 190 hubs… 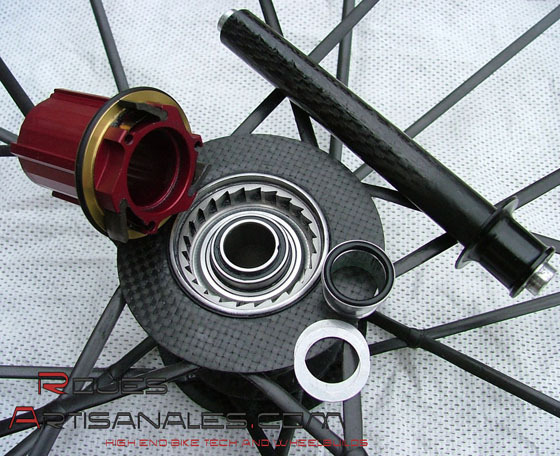 On the scales, our Generation 3s are 450g and 538g front and rear. 988g for the set in 16/20 spokes. We are definitely in the very very light weight category! Even though the
previous Generation 2 wheelset was only 922g in 12/20! The slightly higher weight is down to the higher spoke count and the finish.

Taken as a whole, this new version of the Lightweight wheels is a real improvement. Higher stiffness and improved finish are the most important points. For the future, the Obermayer will get some of the prototypes Challenge 700 features as seen at Eurobike, the weight will be even lighter without losing any stiffness or strength.
In terms of the range, the Obermayer, tubular version, are still at the top. They are the lightest version and feature the Tune mechanism at the rear. They are followed by the Standard, tubular version again, with the internals of a DT Swiss 240s rear hub. Then, there are the Ventoux with low profile rim, available in two versions with Tune or DT Swiss rear hub.
As part of the 2008 range, an extra version has been unveiled. It is the deep profile rim Standard version, but for clincher this time. The weight is between 1080g and 1095g in 16/20 spokes, maximum tyre pressure is 8.5 bars and expect to pay €3400 when they’re available in March 2008.

Table summarizing the Lightweight wheels for 2008