The new was spread at the Eurobike 2010: the hub range would receive larger axles and they should weight a little less. The name change was however not expected so it seems like the final weight save exceeds the original. Obviously all the hubs of the range should benefit of this modification to standardize the parts of the mechanism.

We can differentiate quickly this new Mag 170 from the former Mag180 by the color of the freewheel that is gold instead of red. Both end tips are black. The latest production versions receive a blue freewheel. 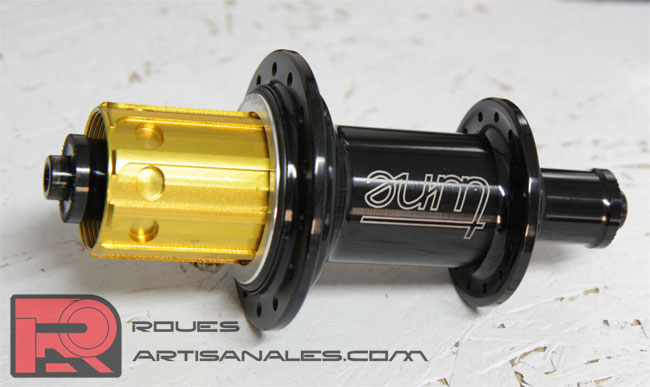 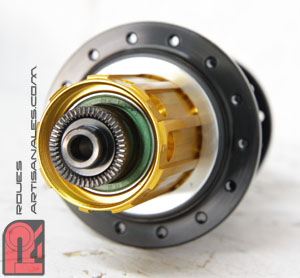 This new Mag170 hub features a newer geometry. Indeed the spacing between the center of the hub and the non drive side flange is lower than its predecessor: 35mm instead of 39mm. The flanges diameters and the drive side flange spacing remain the same. This more compact shell will favors the spoke tensions balance on both sides of the rear wheel.
Then, the diameter of the central part of the shell is 3mm larger than before. The Mag180 shell had a diameter of 28,3mm, this Mag170 is 31,6mm.

The freewheel mechanism remains unchanged, nevertheless the pawls diameter is widened. Indeed because of the 17mm axle, the outer diameter of the related bearings is 2mm more important: from 24mm to 26mm. Thus it is necessary to increase the teeth ring diameter to have enough material between the bearing and the pawl. Please see the picture below: 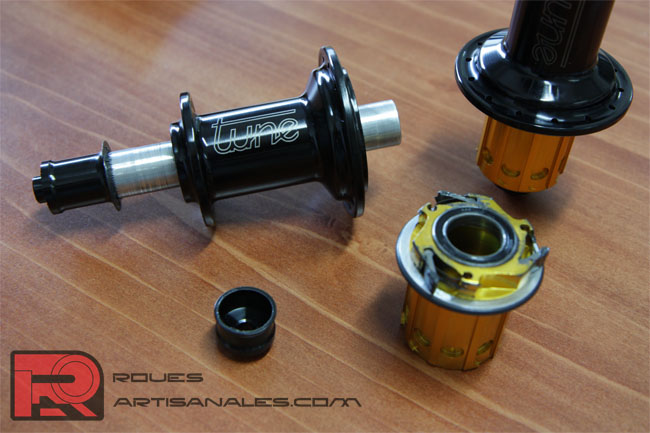 Regarding the bearing pre-load, Tune abandons the former system. This former system pre-loaded the bearings through a end nut screwed on the axle and pushing on a small rubber O ring. On the latest version, the system is as simple as a end cap pressed onto the axle just like the Mag150 and Mag160 of the range, but also like the DT Swiss and Powertap hubs for example.

The picture below illustrates the different hub geometries we can encounter.
You can notice the two following points, related to the current topic:
– Mag170 hub shell larger than the Mag180
– Mag 170 non drive side flange is closer to wheel center than Mag180